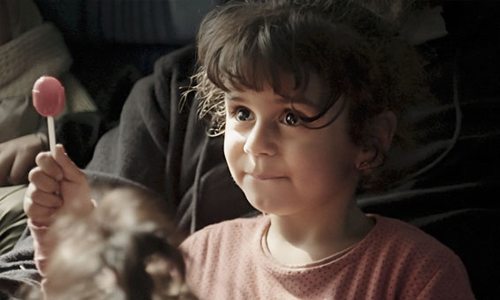 I kicked off my day of doc-feasting early this morning with Mr Gay Syria at the new Light multiplex which, I must say, has the most comfortable cinema seats I have ever reclined in.

Syrian refugee Mahmoud has been granted asylum in Germany but regularly travels to Istanbul to organise beauty pageant, ‘Mr Gay Syria’. He wants a Syrian refugee to compete in ‘Mr Gay World’ to bring international attention to the life threatening situations faced by the LGBT+ community in Syria.

Hussein hopes to win the pageant so that he and his family can leave Istanbul and travel to Europe where his young daughter can have a safe and free life, unthreatened by civil war and unrestricted by the societal pressures that have caused him so much pain as a homosexual.

It’s hard enough to be a refugee, let alone a gay refugee. With ISIS in Syria and growing homophobia in Turkey, one character comments “even some European countries don’t accept LGBT people”. “We should seek asylum on another planet” his friend half-jokes.

This is certainly a side of the Syrian refugee crisis that I haven’t seen before and in focusing on the Syrian LGBT+ community director Ayşe Toprak crafts a sometimes formulaic but always very touching and poignant film.

‘69 Minutes of 86 Days’ is exactly what it claims to be. Director Egil Håskjold Larsen accompanied a Syrian family on their 86-day journey from a Greek island all the way across Europe to Sweden armed with a steady-cam rig and aided only by an interpreter (who doubled as sound recorder) and a focus puller. This purely observational documentary depicts the journey entirely from the point of view of 3-year old Lean. No interviews. No voiceover. No archive new footage. No onscreen text. Just a series of long, gliding child’s-eye-view shots capturing the hustle bustle of long distance travel. Needless to say we see a lot of legs.

So much media coverage of the refugee crisis focusses on very challenging and complicated issues and traumatic situations. And depending on the spin, refugees are often reduced to a singular mass of either unwanted migrants or helpless victims. This film highlights its subjects as individuals of agency, resilience and most importantly, dignity. By quietly observing the family interact with each another while they face the trials and tribulations of the road, the film humanises them in a way that feels all too rare in the current cinematic climate. Whether it be Lean sharing a lollypop with her baby sister and then lovingly smothering her with cuddles, or her uncle nodding off on a long train journey only to be rudely awakened by Lean’s playful pestering – these are all universally recognizable yet intimate moments, not to mention incredibly endearing. This is simply an ordinary family on a very long journey.

But to call Lean ordinary feels wrong. She is bursting with spirit and wonder making her a joy to watch. And her naïve point of view offers a fresh and, in my opinion, vital perspective on the crisis. Locations, logistics and politics aren’t touched upon at all. She’s on an adventure to ‘Swedish Germany’ (Lean’s own words) to see grandma and grandpa. And that’s all we need to know.

There are very few moments of high drama or antagonism. Not the kind we’ve become accustomed to seeing in the news anyway. We don’t hear about the conflict this family is fleeing. We don’t witness boats being overturned in the Mediterranean, police brutality or squalid living conditions in refugee camps. Aside from some slightly aggressive police officers charged with keeping a queue in line and a panicked struggle to board a packed train, there’s very little to upset Lean. That’s not to say the adults aren’t struggling with pain, uncertainty and fear. In one shot, Lean’s uncle’s inner plight is beautifully exposed by a single tear running down his cheek. But overall Lean remains unaffected and fascinated by the world around her.

Along the journey we see many people helping and supporting each other with small acts of kindness and compassion. Not just the family and their fellow travellers. Not just volunteers and NGO workers but police officers and border agents too. It’s refreshing.

The cinematography is stunning and the music compliments the imagery beautifully, often turning something as every-day as running to catch a train into a thrilling set-piece.

In ‘69 Minutes of 86 Days’ we see many other people making the same journey as Lean and her family. The sheer number is bewildering (especially at 2 foot off the ground). But this film focusses on the tiny things that make people human and for that reason it is a triumph. It’s sometimes easy to be disappointed that so many North Westerners still need to be reminded that refugees are people no different from us, but its heartening to see that it takes such a short time in the company of a film like this for people to remember that fact. There’s plenty of room for more positive refugee documentaries like this one. This evening I had the pleasure of meeting director Egil Håskjold Larsen and congratulating him on a wonderful film. It’s been my favourite so far.

Your ticket for the: Blog: Refugee Crisis Films at Sheffield Doc Fest 2017