Women on the move need safety: All Women Count blog

Refugees face challenges at every stage of their journeys: from clandestine border crossings to perilous oceans, to underfunded and overcrowded refugee camps or insecure urban accommodation. For refugee women, these risks are constantly heightened.

Many of the risks faced by women in camps, both in Europe and elsewhere, stem from the space itself. Insecure shelters, lack of safe spaces and alienation from policing and reporting of crime create interlocking risks and, often, a climate of impunity. Single women, or women-headed families, are particularly vulnerable  – and they are often forced to rely on men for protection, placing them at further risk of exploitation. 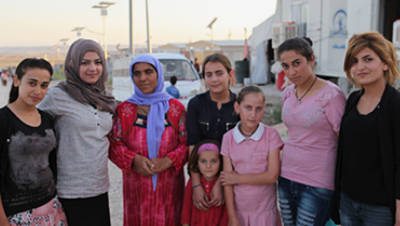 Inca Sorrell, who co-founded the Unofficial Women and Children’s Centre in the Calais “Jungle,” noted that women – including minors – were often forced to remain in abusive relationships, or enter in to exploitative ones, in order to be seen as having the “protection” of a male within the camp. This has also been reported in a new UNFPA report, Voices from Syria, which said that: “women and girls ‘without male protectors’, such as widows and divorcees, as well as female IDPs (Internally Displaced Persons), were regarded as particularly vulnerable to sexual exploitation.”

In camps across the world, incidents of abuse and gender-based violence continue to be documented. Yet exploitation can also take more subtle forms.  Lamya Karkour, who worked at the Intervolve Women’s Centre in Northern Greece’s notorious Softex camp, noted that “men were often taking the [UNHCR cash] cards of women in order to access services or get cash in the city – sometimes with the intention of helping the women out, but often the support was not sincere. This also resulted in women become dependent on others in the camp, and not knowing how to get cash or access services in the city.” Insecurity in camps can therefore chip away at women’s autonomy, both during their time in camp and beyond.

The risk of sexual and gender-based violence is often exacerbated by inadequate camp facilities. Poorly lit hygiene facilities, and weak locks have often resulted in women feeling too afraid to use the washrooms after dark. Lamya and the Intervolve team noted that women in Softex – a camp funded by the European Union – “were afraid to leave their tents or caravans at night to go to the toilet…and even in the day women would guard the communal toilets for each other. One man even created a toilet inside [their] tent for his pregnant wife.” This reality pushes women further from camp life and rendered them increasingly vulnerable.

Overcrowding, a common feature to camps in Europe and elsewhere, compromises the ability of services to support women (and other vulnerable individuals). A recent press release from UNHCR, for example, said that “in Moria, 30 government medical staff, psychologists and social workers share three rooms, conducting examinations and assessments in the absence of privacy. This affects work conditions for those staff as well as their ability to identify and help SGBV [sexual and gender-based violence] survivors.”

Cultural, linguistic and experiential barriers further limit women’s access to healthcare, particularly that which is provided by the state. Inca noted that fears of the French state, often rooted in experiences of police harassment or discrimination, meant that many women were unwilling to go to the hospital – often with devastating consequences.

Similarly, the Intervolve team noted that “most [women in Softex] were scared about going to the hospital, where there was rarely a translator and you might be given treatment without understanding what it was.” 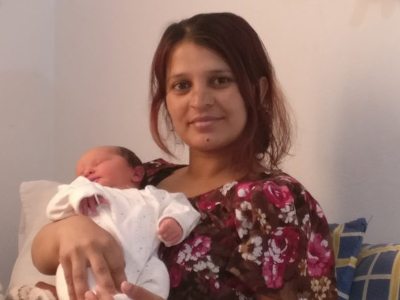 “Women [in camps were often] scared to give birth and not be able to communicate with the doctors.”

“In particular,” she said, “women were scared to give birth and not be able to communicate with the doctors. Women were often given a caesarean section without the opportunity to make an informed choice…There was a gynaecologist who came to the camp twice a week, but they always had a male translator and so women did not feel comfortable to talk.”

Such experiences and challenges are not simply erased when women are relocated to urban or long-term accommodation. Inca noted that many women from Calais, who are now living in the UK, are at-risk of re-entering abusive relationships as they seek a measure of protection from destitution or other threats. Furthermore, it was also common for smugglers to ask for “extras” from women seeking passage to the UK. The feeling of having few other choices, and the risk of using transactional relationships as a way of ensuring basic shelter and some form of security, is not easily overcome.

In Greece, the closure of Softex camp meant that many of the residents were then moved to urban accommodation. While a clear improvement, the Intervolve team noted that the women of Softex “spent a long time isolated from the city, reliant on on-site support from NGOs. They are now struggling to access the services they need and receive insufficient support to look after themselves and their families. Social isolation and boredom are a huge problem… some women said that they rarely leave their apartments because they have nowhere to go, feel unsafe and struggle to navigate the city.”

Insecurity and the threat of abuse effectively removes women from camp life, denying them access to basic services as well as having a detrimental effect on their physical and mental wellbeing. Grassroots efforts, including the centres – first in camps, and now in cities – where Inca and Lamya have worked, have supported vulnerable women across Europe and the Middle East. Yet all of us would agree that this is not enough: these protection challenges can only be overcome with policy and practice reform. Humanitarian response should be sensitive to intersectional vulnerabilities – both in theory and practice – and provide effective protection for all who are at risk.

Help Refugees supports women’s centres in Greece, Lebanon, Syria, and the UK. This article was prepared in collaboration with Lamya Karkour and the whole team at Intervolve, who managed the women’s centre in Softex and now run the Irida Women’s Centre (Thessaloniki, Greece), and Inca Sorrell from the Meena Centre (Birmingham, UK). To help us help them, please donate here.

This article first appeared on All Women Count on March 6, 2018. It was written by Amelia Cooper (Help Refugees), Lamya Karkour (Intervolve) and Inca Sorrell (Meena)

Your ticket for the: Women on the move need safety: All Women Count blog

Women on the move need safety: All Women Count blog