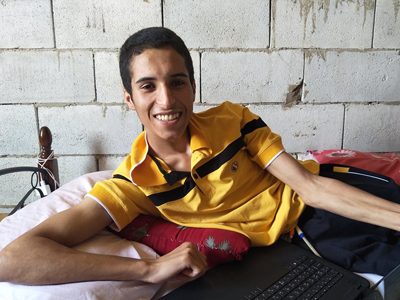 The story of Hozaifa, a Syrian refugee who stayed in his home country to continue his education, but was subsequently paralysed by an air strike attack on his way home from school, tells the struggle faced by many families currently living in the Bekaa Valley, Lebanon.

Eighteen-year-old Hozaifa greeted a group of three volunteers from our partners Salam LADC’s. “As-salamu alaykum,” he said in traditional greeting before extending his hand to shake theirs. His eyes were beaming above a smile of naturally straight teeth. Despite the discomfort it caused, he leaned up in bed as far as he could to show that their presence was welcome.

Hozaifa is paralysed from the waist down and as the fresh scarring along his spine indicated, he was still in pain from his third back surgery completed just two weeks ago. As he told the story of his journey from Syria, his four younger siblings filtered in and out of the room. Mum and Dad sat on the floor rug.

In 2011 as violence erupted, Hozaifa’s father fled their home in Idlib, Syria just north of where a chemical attack killed dozens of civilians this past April, to establish a new safe home for his family. In such a situation, it is typical for the male of the household to move ahead first to sort out all the unknowns.

In 2013, Mom and the four younger siblings moved to reunite with Dad in the Beqaa Valley of Lebanon. Safety was rapidly deteriorating with bombings on the rise which led to items of necessity rapidly inflating in price and life in general becoming much harder.

Hozaifa stayed behind in Syria to continue his education. As he told this part of the story, his words were saturated with passion over his favourite subjects of Arabic Literature, English and Civics. He paused from the painful narrative to discuss his love of law, former desire to be a doctor, and tangential joys in the fields of math and physics. With the emphasis placed on learning and his new desire to be an agricultural architect, it’s no surprise Hozaifa would opt to stay in school and continue learning rather than to run from the only path he thought led to a bright future.

One day in 2016, his hopes and dreams were decimated as he was riding home from school on the back of a motorbike with his cousin and a bomb dropped from a plane blew them off the ground. He’s not sure if it was the explosion shockwave, shrapnel, or the building that fell on him, but some force of those actions hammered his spinal cord to a functioning halt.

He had two surgeries in Syria before he could reunite with his family and has since been mostly resigned to bed. He can’t go to school because he can’t sit up yet or find transportation to get him there and private tutors are cost prohibitive.

His mother desperately wants to provide her son with the good education he thirsts for, and offer him a beneficial activity to focus on besides his mobile phone, but they just don’t have the money. The barren concrete structure they live in more closely resembles a far from incomplete construction that has been squatted in.

A single light hangs from the only thin wire snaking up the wall of Hozaifa’s room. There is no insulation or glass in the window frames, which welcomes in the biting cold of snowy mountain winters. The rotting wood framed threshold is indicative of the water that pours through the roof when it rains.

This half-finished shell of a structure costs the family $150/month which might not be pricey by western standards, but it is half of the father’s monthly salary earned as a gas station attendant. Hozaifa needs diapers, antiseptics, and nutritional supplements to help combat the weight he is losing, but this family are struggling to pay for all these needs, as well as food for the rest of the family.

While the family likes Lebanon, they don’t feel safe or secure here. They are guests in a country where they are not allowed to work. Transient populations are constantly shifting in tents and settlements. The family agree they will endure this life in the short term, but their sights remain set on the UK and Norway, places Hozaifa dreams of one day going to school.

For now, love is what has been getting the family through tough times. In addition to the strength derived from the tight knit family bonds, others have been willing to help out where they can. When the family was unable to pay for the third surgery, a Swedish journalist who had previously heard Hozaifa’s story stepped in to foot the bill.

Hozaifa’s mother, as she poured hot chai for her guests, jubilantly gave thanks for this woman who was even there in the waiting room during surgery hugging, squeezing and comforting her. She left additional money for some medications and later sent a laptop which is helping Hozaifa learn English among other things.

Find out how to get involved with our work here.

Please support the amazing work of Salam LADC and our partners in Lebanon by donating here.

Your ticket for the: PARALYSED SYRIAN REFUGEE LIVING IN LEBANON