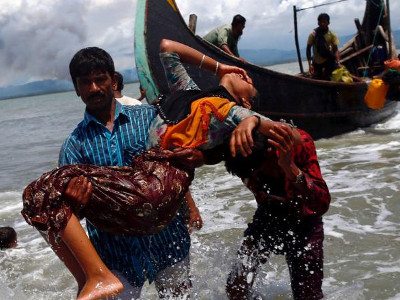 Write to your MP about the Rohingya people in Myanmar: a template letter

The persecution of the Rohingya Muslims in Myanmar has escalated in recent weeks, and a military offensive that begun in late August has already displaced over 400,000 people.

The community have long been marginalized in Myanmar: they are denied citizenship, and have been subjected to waves of violent repression by the military. In February 2017, the UN found that government troops are ‘very likely’ to have committed crimes against humanity during their previous campaigns against the Rohingya.

While some figures in the British government have raised the plight of the Rohingya, the response has thus far been inadequate. As the number of refugees living in under-resourced, makeshift camps in Bangladesh continues to rise, it is important that our government steps forward to provide assistance to those displaced.

We have written a template letter below to contact local MPs and councillors, which you can edit and adapt as you see fit. Find your MP and how to contact them here.

Almost half a million Rohingya refugees have fled Myanmar over the past three weeks, following an escalation of brutal state violence that has reportedly included rapes, massacres and the burning of villages. Eyewitnesses have told human rights organisations that children have been beheaded and civilians burnt alive, and most recently claimed that local mobs have also joined the violence. The UN High Commissioner for Human Rights, Zeid Ra’ad Al Hussein, has said that the military’s brutal campaign seems to be a “textbook example of ethnic cleansing”.

The present situation is not isolated; rather, it is yet another incident in a long and miserable history of the Rohingya’s oppression. The community are unrecognized in Myanmar and thus denied citizenship rights, which has effectively rendered them stateless. Furthermore, the UN found in February 2017 that government troops ‘very likely’ committed crimes against humanity during earlier campaigns of violent repression. The response of our government must acknowledge the protracted nature of the community’s subjugation.

I am aware that the current plight of the Rohingya has been raised by a number of figures within the UK government, for which I am grateful. However, I was hoping that you might be able to update me with regard to the following questions:

It should also be noted that the Bangladeshi government has imposed travel restrictions on Rohingya refugees, prohibiting them from going to stay with family or friends. A rights-centred approach must be encouraged on both sides of the border.

I hope that you are encouraging the British government to treat the Rohingya’s displacement and persecution as a matter of the utmost urgency, and look forward to hearing your responses soon.

With thanks and best wishes,

Your ticket for the: Write to your MP about the Rohingya people in Myanmar: a template letter

Write to your MP about the Rohingya people in Myanmar: a template letter