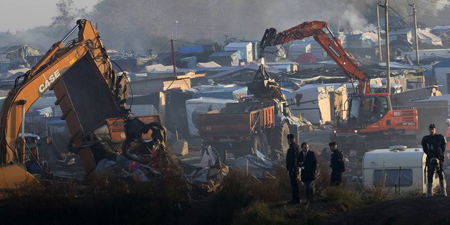 The Calais Jungle… three years on

Three years ago today, bulldozers started entering the Jungle camp in Calais. Famous for being one of the largest refugee camps in Europe, with 10,000 people at its peak, this huge eviction dispersed the residents of the camp, refugees from all corners of the earth, across France. Today the piece of land where the Jungle camp once stood is a nature reserve. It’s a sanctuary for migrating birds. Such irony.

Calais is a complex, diverse and challenging place, containing layers of kindness and racism in sometimes equal measure. It’s always been a focal point for migration and it always will be, because of its proximity to the UK. Today there are nearly 1,500 displaced people living between Calais and Dunkirk, including nearly 250 unaccompanied children and an increasing number of families.

Since the large Jungle eviction on October 24th 2016, there have been 1,301 recorded evictions in Calais, plus 173 evictions in the neighbouring camps in Grande-Synthe. Police arrive at people’s makeshifts camps, often just a few tents gathered together, to form large and ominous perimeters. They hold tear gas canisters and batons, intent on removing people from where they’re sleeping. Shaking and slashing tents, seizing blankets in summer or winter, this continual harassment is ever-present in Calais.

We’re three years on. Why no positive progress?

Grassroots organisations from both sides of the border continue to fill the gaps left by governments and international NGOs. As the political rhetoric of Europe swings to the right and the uncertainty of Brexit looms over those who are displaced and dislocated, people strive to bring a sense of community as they continue to survive in such grim and deteriorating living conditions – for through community you can get glimpses of humanity. Over the last three years, the sporadic flurries of media attention focus on Channel crossings by boat and tragic deaths at the border. Those who have been dehumanised into a statistic are only given the right to their identities when they die.

The hostile environment is not a static policy. It is not set in stone. It evolves, shifts and hardens in its approach. With two more deaths of young men in the Channel, they government puts another border force boat in the water to increase security. Children being exploited in the hands of smugglers; they close some of the final legal routes of passage.

And then the horrors of this week. 39 bodies, including a child, found in a lorry in the UK. A tragedy too hard to write about. But write about it we must. Blame the smugglers, blame the wars, blame the arms trade, blame the financial markets, blame the poverty. But do not blame the people. Do not scapegoat the victims. Do not respond with more draconian hostile policies. Our solutions must be humanitarian at their core; not in the ’emergency response’ solution that nowadays is associated with this word – but with its core meaning; a focus on promoting human dignity and welfare.

‘If there are still people there, what can we do?’

Step up. We all have to step up.

Human Rights Observers are on the ground every morning in Calais and Dunkirk to ensure human rights violations by the French police during the daily evictions are being monitored.

Organisations have formed to welcome and integrate asylum seekers as they arrive in the UK. These organisations ensure that central to their work is the need to let people be heard. Groups like Welcome Presents, which aims to bridge the divide between refugees, asylum seekers and the wider UK public, using food, film and friendship. And May Project Gardens, which uses gardening, food and hip hop to overcome disempowerment, build community and pass on skills.

Our wonderful partners, Refugees at Home, are supporting ordinary citizens (just like you) to open their doors and welcome in refugees by hosting them.

Our partners at Safe Passage are fighting to ensure that family reunification routes of passage remain open, despite government shifts in policy.

Since the Jungle eviction, Help Refugees has welcomed more than 15,000 volunteers to our operations on the ground in Northern France – chopping wood, sorting clothes, cooking rice.

Whether it’s changing conversations at the kitchen table, volunteering, fundraising or writing to your MP – whoever you are, wherever you are – we all can, and must, play a part. 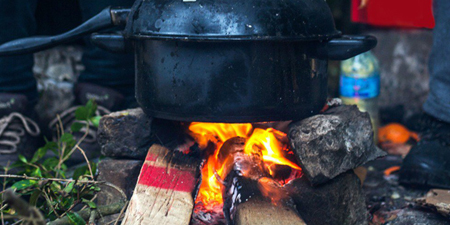 Volunteers needed at the Calais woodyard!

The Calais woodyard are looking for volunteers to help chop, prepare and distribute wood to refugees and displaced people in the region.

Wood is used to cook, dry clothes, heat water to wash and to keep people warm during the winter when temperatures can drop to below -5°C in northern France. Between November 2018 and April 2019, the woodyard distributed 266 tonnes of firewood to communities of displaced people around Calais. This autumn and winter, they need help to continue providing this vital service.

The team are looking for volunteers to assist with the running of the yard including; distributions, preparing wood for distribution, working alongside other associations.

As a small team, flexibility and willingness to learn is key. All training will be provided and tailored to roles undertaken by the volunteer.

Donate to the woodyard

If you aren’t able to volunteer but would still like to support the work of the woodyard, they currently need:

If you think you might be able to help with any of these items, please get in touch at: calaiswoodyard18@gmail.com

Your ticket for the: Volunteers needed at the Calais woodyard!

Volunteers needed at the Calais woodyard!