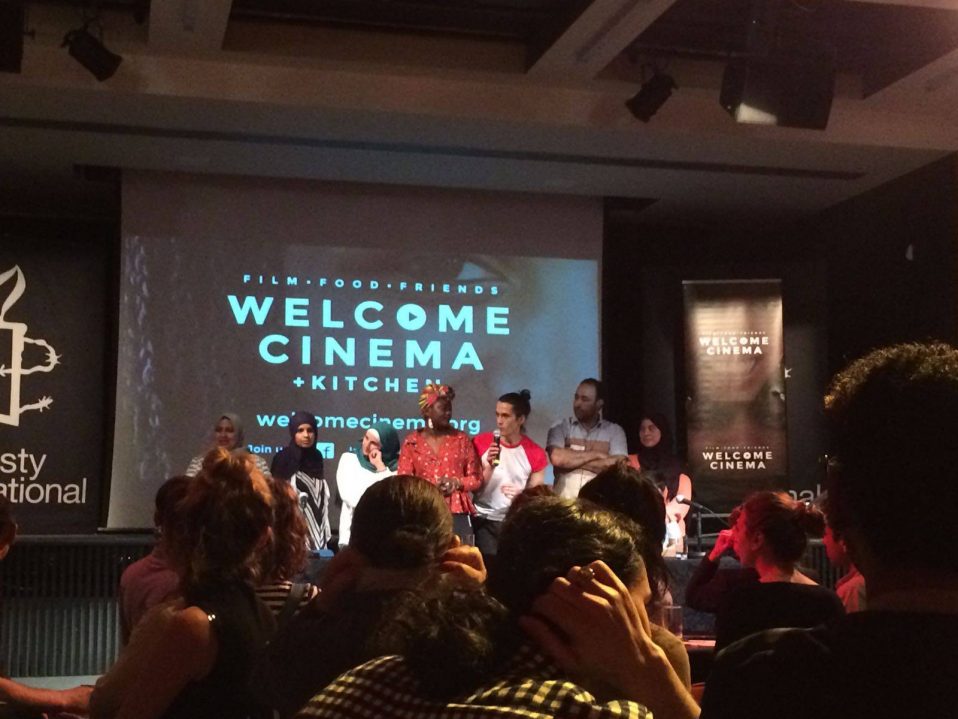 Last night The ‘Unofficial’ Women and Children’s Centre and Amnesty International UK hosted the sixth ‘Welcome Cinema’, open to everyone, free for refugees and asylum seekers. This is a monthly initiative aimed at creating a warm inclusive community for newly arrived refugees. By helping fund this initiative, we hope to foster greater relations between refugees and wider local communities.

The Welcome Cinema evenings will continue to take place once a month. The event provides an evening of cinema entertainment, delicious Middle Eastern food and opportunity to meet like-minded individuals passionate about bringing people together.

If you are interested in getting involved or to find out more, please email: welcomepresents@gmail.com 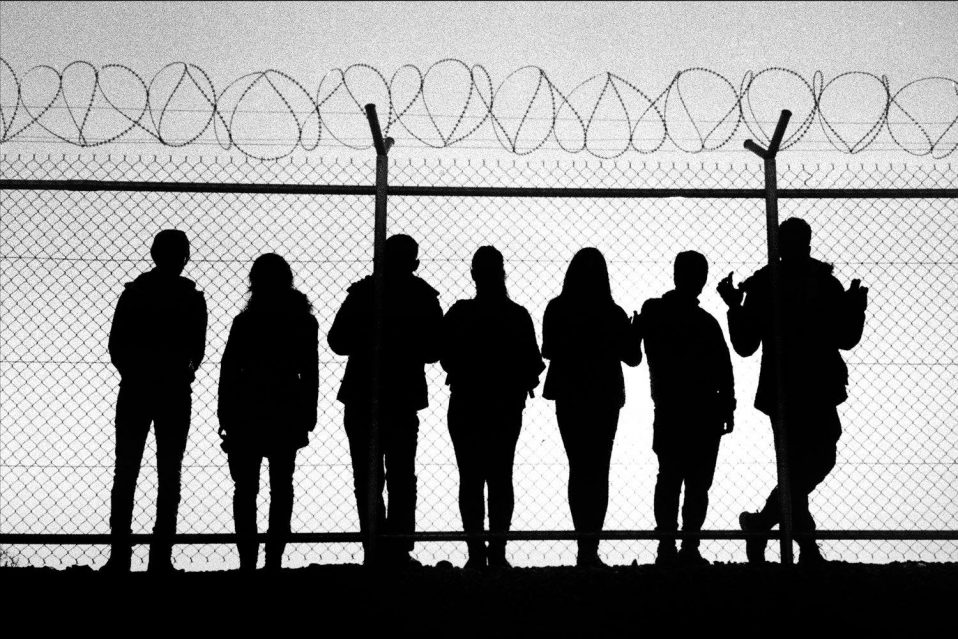 Help Refugees are proud to present the project CrossRoads, supported by InterVolve, a non-profit based in SoftexCamp Thessaloniki. CrossRoads is a photography project that was created by Greek photographer Tasos Markon and Lois Simac a photographer from France, encouraging refugees to tell their story through an artistic lens.

Bringing together refugees of multiple nationalities, the project aimed to teach photography to refugees living in Thessaloniki, and give people an outlet to capture what they were experiencing. Through photography, the professional community hoped to empower refugees to share their story, illustrating the harsh conditions and cold weather of Thessaloniki’s tough 2016/17 winter.

CrossRoads have created a platform for refugees to express themselves and communicate how life is really like living in refugee camps. The project has helped foster new exciting relationships between refugee and local communities, and the photographs produced beautifully capture the dynamic working relationships that exist between refugees, aid workers and individuals of local Greek communities.

The artwork is now being assembled into the final story and will be displayed in an exhibition in Thessaloniki later this month; watch this space for further updates. 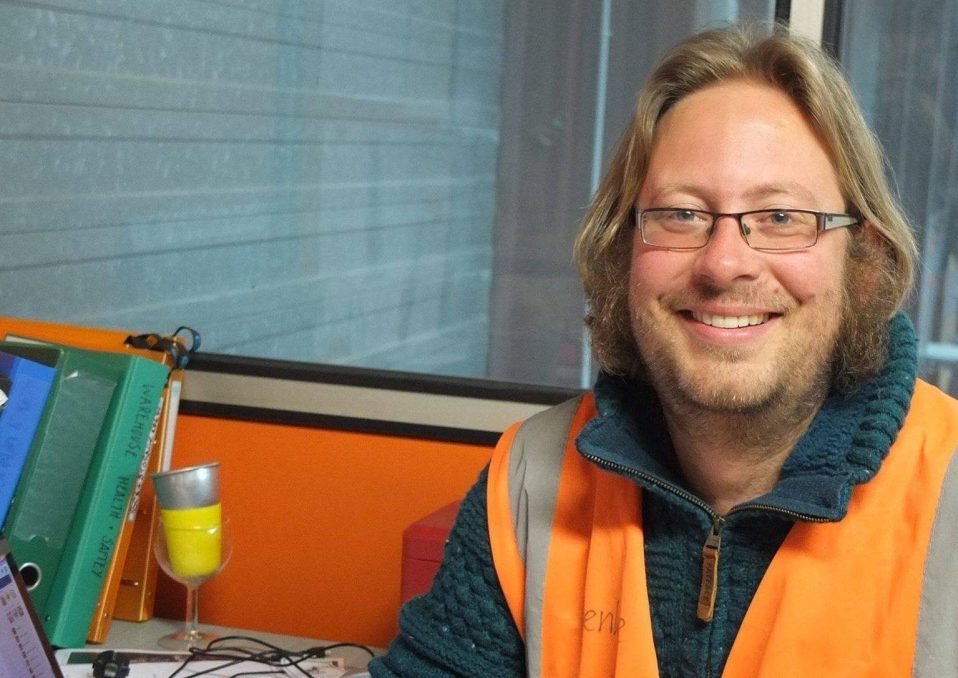 Renke Meuwese is our longest serving volunteer in Calais. He was already in Calais when we first arrived with a van full of donations 19 months ago and over that time we’ve seen the situation in Calais change drastically together. He has been at the forefront of the Calais warehouse, both training long-term members of the operations team and inspiring short-term volunteers to get involved and contribute to grassroots action.

He has helped to unpack lorry-loads of donations arriving from all across Europe, facilitated the sorting of these goods, and most importantly enabled the critical distribution of food, clothing and sleeping material to vulnerable refugees across northern France.

Thank you for all your help, you will be greatly missed and continue to be an inspiration to the Help Refugees global volunteer network. 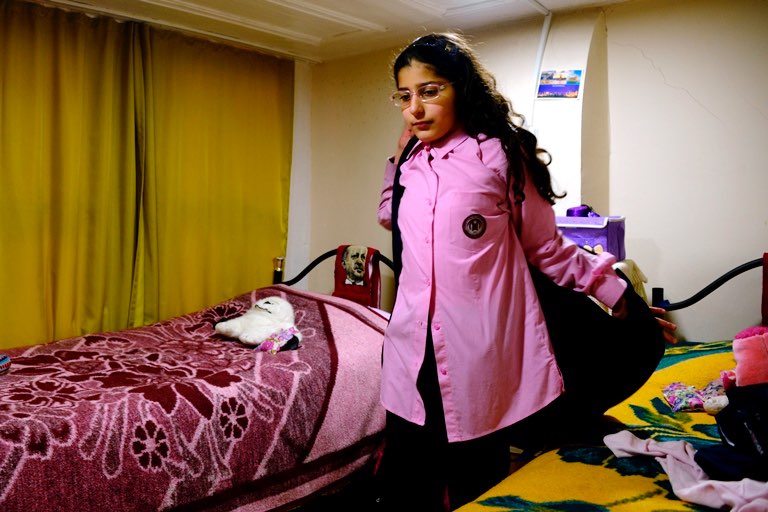 Sabah and Mayas, two 10 and 11-year old Syrian refugees, are shining in their new school. They’ve learnt the new language, and have “compassionate” teachers helping them learn. This story is a bright example of what can happen when children are given the right support and opportunities.
Unfortunately, still only 50% of refugee children attend primary school. Without access to education, children like Sabah and Mayas are struggling to adapt to life in new countries. We need to work together to bring this number down, and give every child the platform to reach their full potential. This is why we are fighting for the rights of child refugees in Europe, and our legal proceedings against the government continue 19 June regarding the closure of the Dubs Amendment.

Sabah and her family fled the war-ravaged city of Aleppo two years ago and came to Turkey as refugees. Since then, they have been living in Istanbul’s conservative Fatih district, home to the Blue Mosque and the Grand Bazaar. Nestled in the old heart of Istanbul, Fatih is a mix of upscale neighborhoods and poorer areas with affordable properties to rent. That makes it an attractive choice for many refugees, such as Sabah and Mayas’ family.

“This is our new home now,” says Muhammad Trefi, 50. He was a civil engineer back in Syria, but now his skills as an engineer don’t have equivalency in Turkey. He has been supporting his family of seven by giving Arabic and Quran classes in the neighborhood. “We won’t be returning back to Aleppo. And it doesn’t seem like this war is going to stop.”

To read the full article about Sabah and Mayas, click here http://bit.ly/2nn7yy7 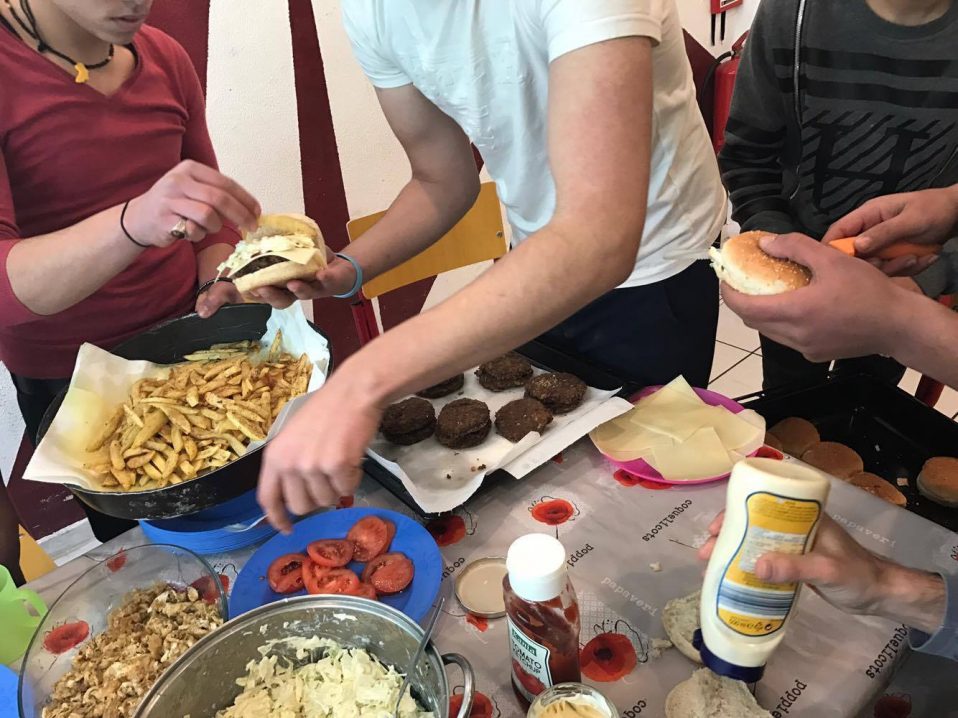 Together with the Chios People’s Kitchen, we have helped fund the first cookery school for young adults from the refugee community on Chios Island.

3 weeks in and we have 6 new chefs in the making. They are training for 15 hours a week for 4 weeks and the food cooked at the end of each day will be the dinner for all the students at the school.

Our aim is to help expand the course to 12 people next months.

Help us raise money for this incredible project by donating here: http://bit.ly/HelpRefugeesDonate

“We know this isn’t enough to please everyone, but we’re hoping it can help someone”

A huge thank you to wonderful children who raised £55 at their school this week, and sent us this beautiful letter. 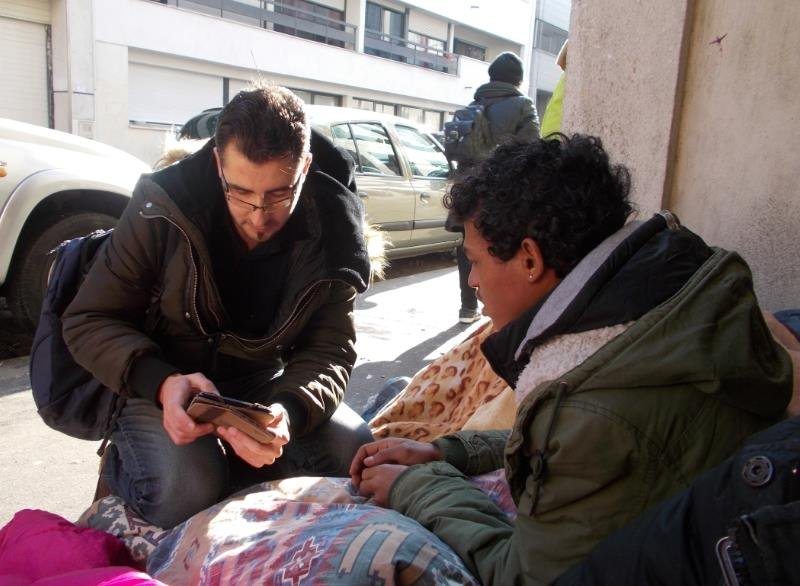 Child refugees in Calais are currently outside state protection, while definitive information about who they are, where they are from, the conditions in which they survive life on the streets, and what they’ve been trough is lacking.
The Refugee Rights Data Project have conducted 10 studies in Calais, Dunkirk, Paris, Berlin and Athens around refugee communities. Their rigorous research methods deeply connected to the communities they study have allowed invaluable information to be gathered and used as an integral part of advocacy.

Their next project will be to research the lost children living on the streets of Calais, providing a great insight into their lives and how the authorities on both sides of the channel have forced them into such precarious conditions, proving the “critical child protection failures” witnessed daily by our volunteers.

Please visit http://bit.ly/2nNR6qD to find out more about their research and to donate towards it. 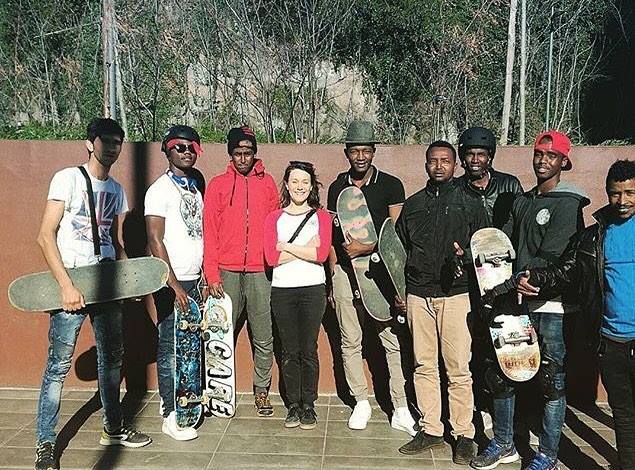 Anyone who’s tried to skate knows how hard it can be to learn. There’s going to be a fall or two, or a hundred. But it’s not something the refugees under our partner Baobab Experience‘s wing have shied away from.

2 weeks ago our partners at Free Movement Skateboarding paid a visit to the Baobab Experience camp in Rome to try and teach refugees how to skate. It’s beautiful to see volunteers and refugees skating together.

We’re proud to work with both these fantastic organisations. Help us continue to support work like this by donating here:http://bit.ly/HelpRefugeesDonate 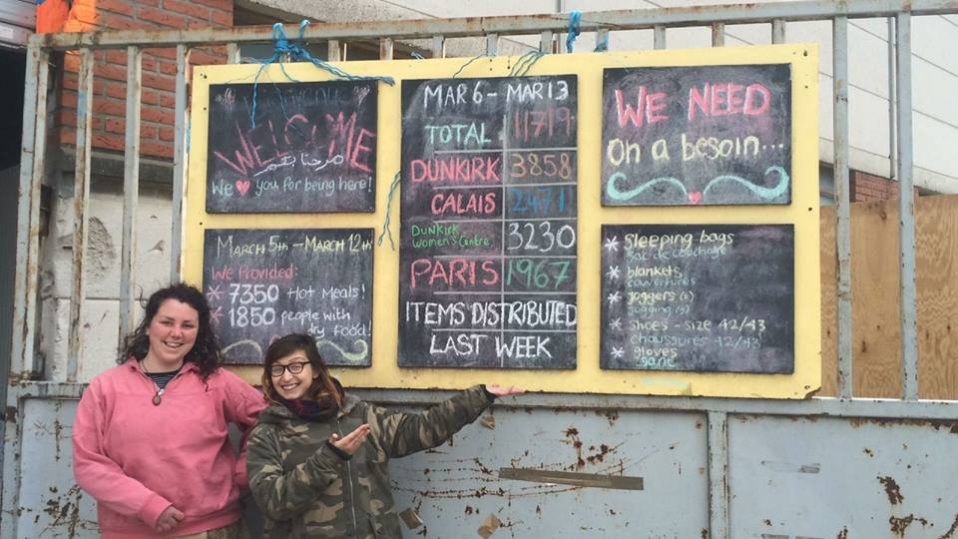 A tribunal in Lille has suspended the inhumane ban on distributing food to refugees in Calais, deeming it illegal

We are pleased to announce the Tribunal in Lille has suspended the inhumane ban on distributing food to refugees in Calais, deeming it illegal.

The Mayor, Natasha Bouchart, announced a ban on food distribution in a large area of Calais on the 2nd of March, but the courts have overturned it.

Following the court’s decision, we will be meeting with our partners on the ground to discuss future strategy and consult with the refugees themselves to find a safe location for distribution of meals.

This validates our collective ongoing efforts to provide for the basic needs of vulnerable children and adults living precariously in the Calais region.

As you can see, we distribute approximately 2,500 items a week to people in and around Calais, in addition to the 10,000 other items distributed in Dunkirk and Paris. Our brilliant partners Refugee Community Kitchen also provide more than 1,000 hot meals every single day!

If you would like to support our efforts for aid with dignity, sign up for a regular donation at http://bit.ly/HelpRefugeesDonate 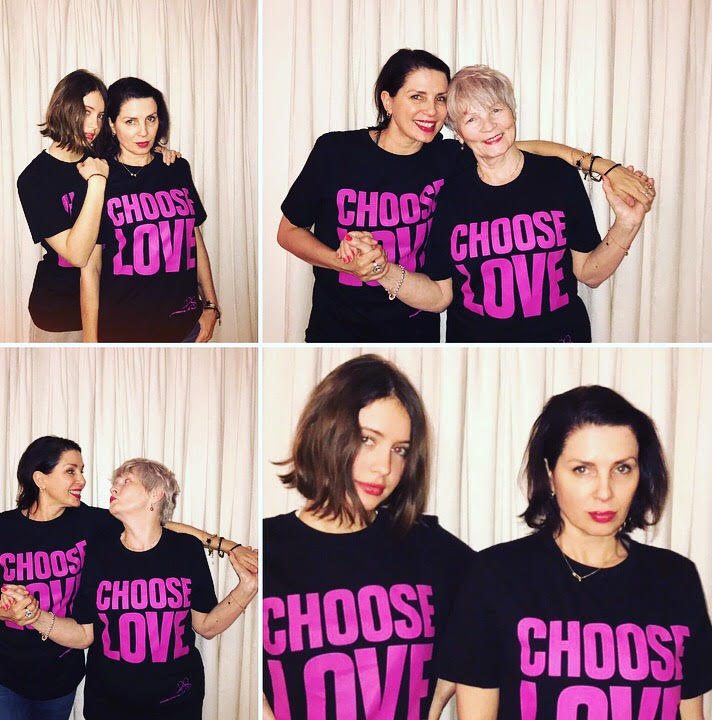 Choose Love this Mother’s Day with our exclusive t-shirt

Are you looking for a unique gift for Mother’s Day? A way to show your love and also help those less fortunate?

Whether it’s for your mother, grandmother, guardian or even your daughter! Show your love like Sadie Frost, Iris Law and Mary Elizabeth – 3 generations of beautiful, strong women – by getting your exclusive pink #chooselove by Katharine Hamnett. If ordered before 2pm Friday it is guaranteed to arrive before Mother’s Day! And we are offering free postage, just use our special code “chooselove”

Show your love the to women who love you back unconditionally, visit https://helprefugeeschooselove.teemill.co.uk/…/choose-love…/

Your ticket for the: Choose Love this Mother’s Day with our exclusive t-shirt

Choose Love this Mother’s Day with our exclusive t-shirt